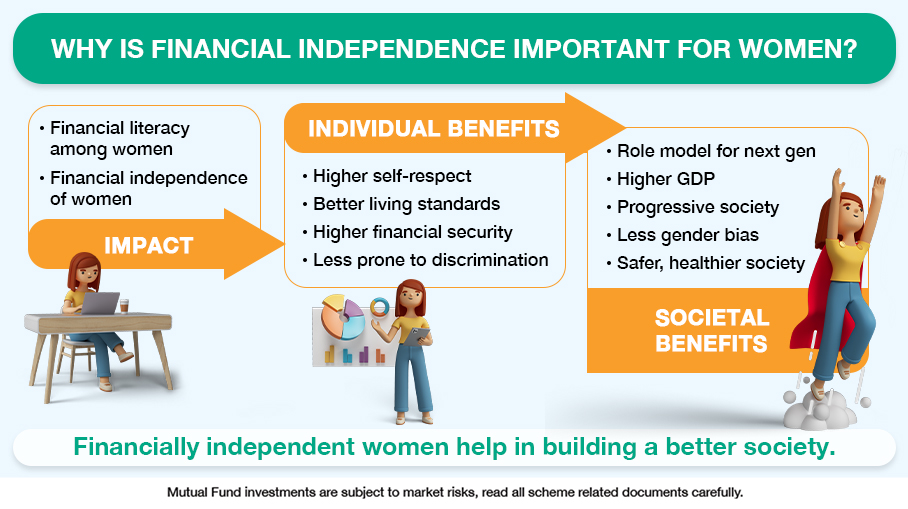 At a basic level, financial independence makes women feel more secure and respected irrespective of their socio-economic background. This automatically has a relay effect not just on women but their families, society, and the country at large. More financially independent women mean a more progressive society that is healthier, safer, and less biased. Financially independent women become role models for their children and help in uprooting the age-old gender biases that are deeply rooted in our culture. Financial independence also helps women to retire early to enjoy the blessing of life after all the struggle they have gone through.

If financial independence of women is of such importance, how can women help themselves first in achieving it even before families, societies, and the government step in? The simple answer is to be a disciplined investor irrespective of a woman’s financial earning capabilities and educational background. Whatever may be one’s financial strength and educational background, unless a part of one’s earnings is saved and invested wisely in the right place in a disciplined manner over time, one will always remain ill-prepared to meet emergencies like job loss, medical expenses, or even the loss of an earning family member.

Today, women are working in a variety of roles yet not all working women are financially independent. Most working women still depend on the men-folk of the family when it comes to making investments. Also, they may not be saving enough or even if they are saving, the savings may not be done smartly i.e it is barely able to beat inflation. This is where women can learn to rely on mutual funds that offer a disciplined way of investing for the long-term through a Systematic Investment Plan (SIP). Even if a woman has little or no earning, she can still put aside as little as Rs.500 from her savings to start a monthly SIP that helps her get closer to financial independence. Hence it is important that every woman realizes to make women feel that mutual fund investing is easy and achievable.